‘Oh my God, oh my God’: How Jill Biden screamed down the phone to Joe when the second plane hit the Twin Towers on 9/11 as he was commuting to the Capitol on Amtrak

On the morning of September 11, 2001, now President Joe Biden was riding his beloved Amtrak from Wilmington to Washington and talking on the phone to his wife.

One commercial airplane had already slammed into the North Tower at the World Trade Center in New York City. She exclaimed when a second followed.

‘Jill, what is it?’ Biden, then a U.S. senator from Delaware, asked his wife.

‘Another plane … the other tower,’ she responded.

Biden is set to mark the 20th anniversary of the terror attacks with visits to Ground Zero, Shanksville, Pennsylvania and the Pentagon on Saturday. 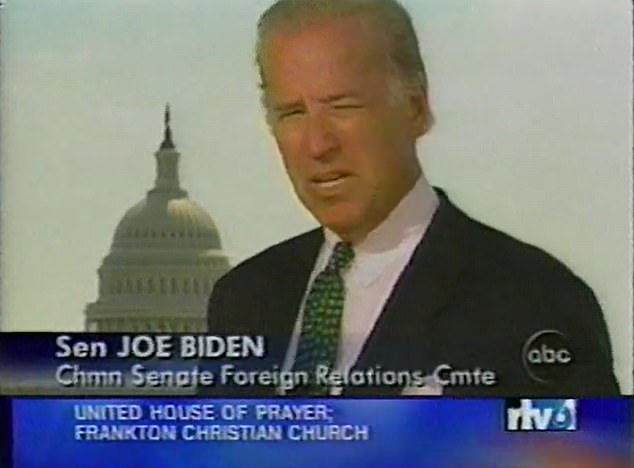 Then Sen. Joe Biden appeared on ABC News after the Pentagon was attacked in Washington and argued that Congress should get back in session and President George W. Bush should return to the White House 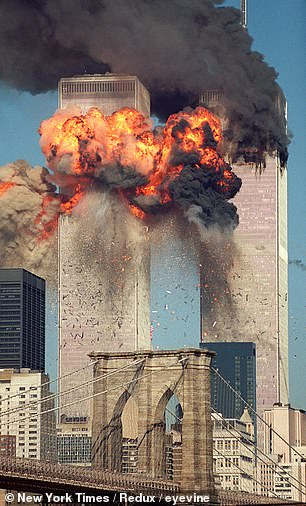 He recounted what he experienced on 9/11 in his 2007 memoir, ‘Promises to Keep: On Life and Politics,’ which he published in advance of his 2008 presidential run.

He wrote that he was trying to project strength and help unify the American people on that fateful day.

When Biden arrived at Union Station, Flight 77 had already disintegrated into the side of the Pentagon, and Washington was masked with a smoky haze.

He headed several blocks to the U.S. Capitol Building, ignoring protests over the phone from his daughter Ashley, arguing it was the safest place to be that day.

‘Damn it, I want to go in,’ Biden told a police officer who refused his access to the building.

Congressional leaders, at that point, had been moved to a secure location.

Meanwhile, President George W. Bush was on Air Force One and Vice President Dick Cheney was in the White House bunker.

Biden wrote in his memoir that it was important to ‘show the country we were still doing business.’

Linda Douglass, who was an ABC News reporter at the time, told CNN in an interview that she found Biden and Sen. John Warner of Virginia discussing who had the most seniority, as they wanted Congress to come back. Biden, at the time, served as the chairman of the Senate Foreign Relations Committee. 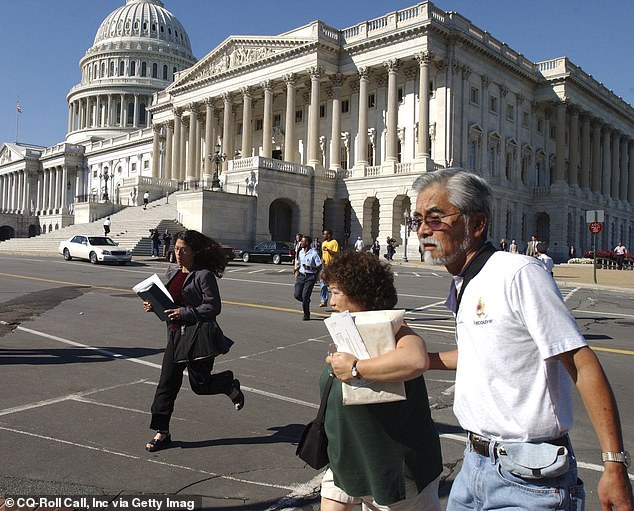 People run from the Capitol Building after Flight 77 crashed into the Pentagon on the morning of September 11, 2001. Biden arrived at Union Station after the Pentagon attack and an officer wouldn’t allow him to enter the Capitol

Biden agreed to jump on-camera and talk to ABC News, following Douglass to the live-shot location several blocks away.

‘I think we should get back as quick as we can, Peter, into session,’ Biden said as he stood beside Douglass and spoke to anchor Peter Jennings.

‘I think we have to show that we’re up, we’re ready, we’re ready to move, we are in fact – nothing has fundamentally altered this government,’ he continued. ‘And the tragedy that occurred to these thousands of people is one that we must in fact follow through and find out who’s responsible for.’

‘But in the meantime, we should be calm and cool and collected about going about our business as a nation. Terrorism wins when, in fact, they alter our civil liberties or shut down our institutions. We have to demonstrate neither of those things have happened,’ Biden added.

Biden wasn’t willing to place blame on American officials not focusing on threats.

‘This in a sense is the most God awful wake-up call we’ve ever had to how we have to redirect our resources,’ he said. 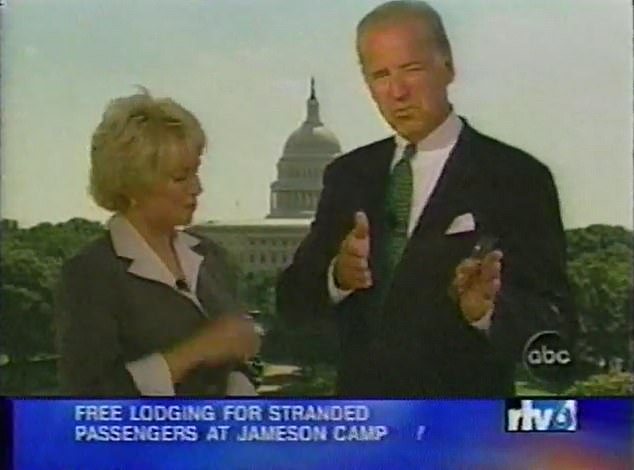 During the TV hit, he also applauded Bush for coming back to Washington, as the president was en route.

Later that day, Biden received a call from Bush, thanking him for his remarks.

‘It was important to show the American people that everybody now was safe and that we were all together in this. There were the Democrats, the Republicans – we were going to be supporting the president totally. And that’s the message Joe sent, and that’s why the president called him,’ recalled former Rep. Bob Brady of Philadelphia to CNN.

Brady gave Biden and his brother a ride back to Delaware that day.

In his book, Biden wrote that Bush had told him the intelligence community had advised him to go to a bunker in the midwest.

Biden argued the president needed to return to Washington, which he did.

‘I hung up the phone, and there was silence in the van until Jimmy spoke up,’ he said of his brother.

‘Whatever staffer suggested he call you just got fired,’ Jimmy Biden joked.

‘I cannot imagine anything that looked more like the Gates of Hell’: Hillary Clinton recalls flying over Ground Zero in a helicopter the day after 9/11

Hillary Clinton still has vivid imagery in her head of seeing Ground Zero one day after the September 11, 2001 terror attacks.

‘We landed at LaGuardia, we took a helicopter, and we circled over Ground Zero,’ said Clinton, who was a senator representing New York at the time. ‘And I cannot imagine anything that looked more like the Gates of Hell.’

The ex-first lady and future secretary of State recalled Friday to CBS Mornings that she was in Washington, D.C., the day of the attacks. 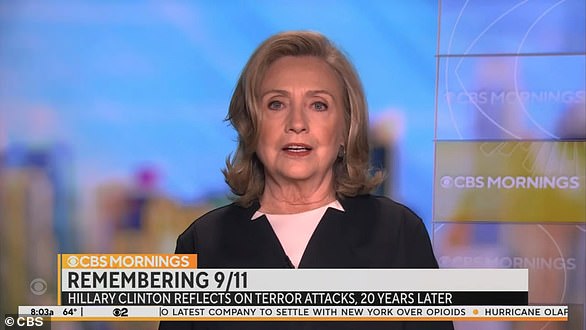 Hillary Clinton, who was serving as a U.S. senator from New York at the time, recalled seeing Ground Zero one day after the September 11, 2001 terror attacks in a Friday interview 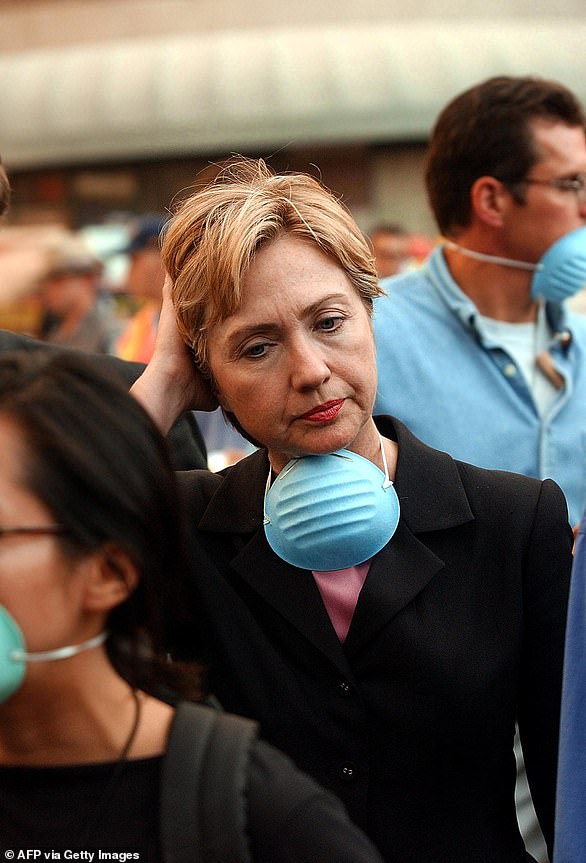 Clinton wore a dust mask to tour Lower Manhattan on September 12, 2001 one day after the 9/11 terror attacks

‘I was on my way to the Senate for a hearing about improving education, actually,’ Clinton recalled. ‘Laura Bush was scheduled to testify when the first plane hit.’

Bush, then the first lady, was active in literacy campaigns.

‘And after making sure that my entire staff was safe and that they could relocate out of the Capitol area, so that we could begin working, I was on the phone, endlessly, talking with elected officials in the state, obviously people in Washington and looking at the television like every American was, glued to the scenes of devastation,’ Clinton continued.

The next day, Clinton traveled alongside now Senate Majority Leader Chuck Schumer up to New York.

‘We were the only plane in the sky, other than fighter jets that were keeping the cover over New York and other parts of our country,’ Clinton said.

Speaking about the hellish scene that played out beneath her, the ex-senator noted, ‘I thought I’d be prepared because I’d seen it on TV, but the TV screen contained it and circling over it was something that I think about and will never forget.’ 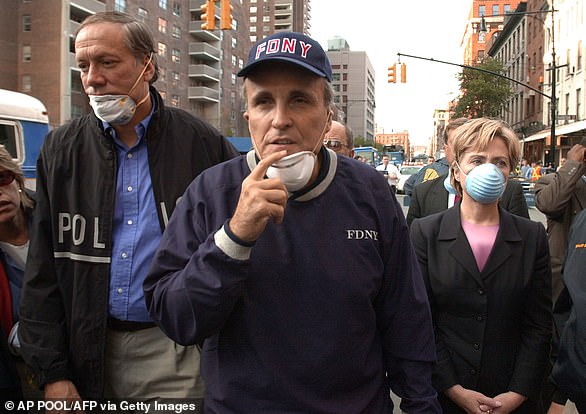 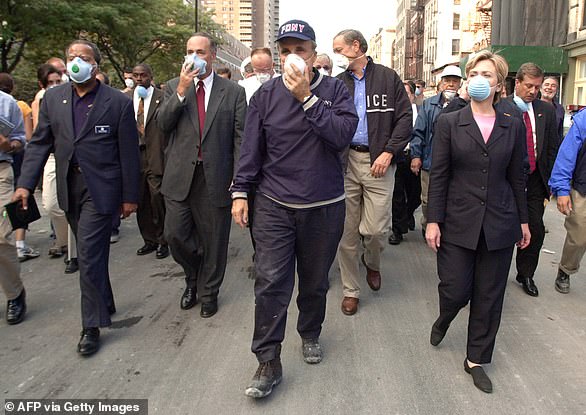 Now Senate Majority Leader Chuck Schumer (second from left) can also been seen walking alongside Giuliani, Pataki and Clinton. Clinton said she and Schumer flew up from D.C. that day 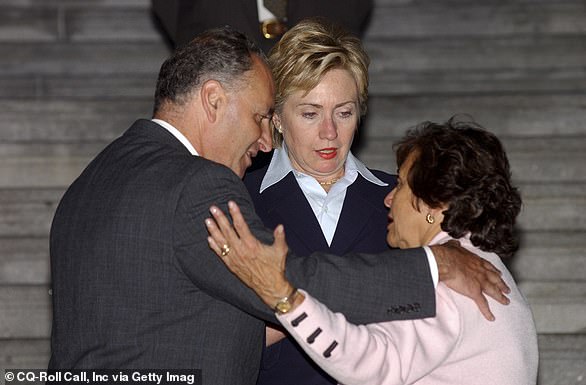 She said Friday what stands out to her was the ‘overwhelming sense of devastation and tragedy.’

She said after her initial horror, ‘then quickly, we had to support our first responders, other emergency workers who were running toward danger not away from it and we had to support the families whose loved ones were literally lost in a second.’

‘We had so much work to do and in a way, it kept me going, in the face of such overwhelming tragedy and of course we were concerned that there might be more attacks elsewhere in our country,’ Clinton said.

Clinton said she was still in touch with some people she met during that era – interviewing some for a recent podcast taping.

‘And as you said, the overwhelming sense of that time was of unity. And it really was an incredible moment of the country in the world coming together,’ she said.