White Cliffs beach with a reserve price of just a POUND sells for nearly £200,000 because it is can be built on (though the sea covers a lot of it at high tide)

A beach by the White Cliffs of Dover that went under the hammer for just a pound has sold for nearly £200,000 but for developers any future property would have to overcome the danger of it being swept away at high tide.

There was a wave of enthusiasm in the bidding for the stretch of coastline by Kingsdown, Kent, that is a popular tourist area.

It went up for sale at auction on Wednesday with a guide price of just £1 but it attracted 396 bids from 14 different prospective buyers. 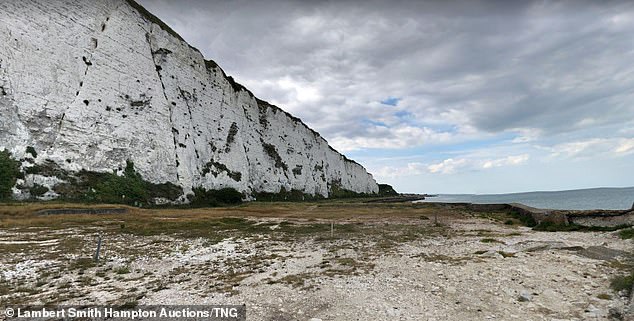 A four-bed, beach front property along the shoreline in Deal, Kent recently sold for £4million.

But the main drawback for this beach is that part is completely covered by the sea at high tide.

Max Mason, head of sales at 574, the auction arm of Lambert Smith Hampton estate agents, said: ‘We are exceptionally pleased with the result which was achieved following an incredibly competitive online auction. 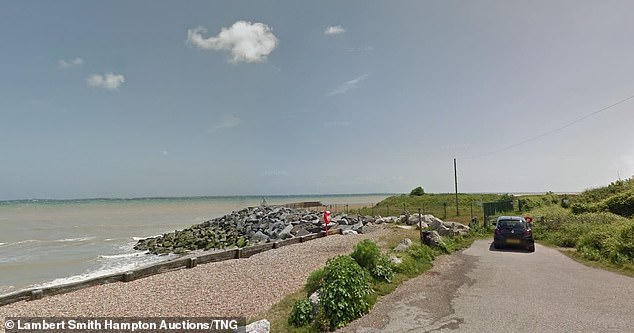 ‘The guide price of £1 was designed to allow the market to find the appropriate value for the asset, which it certainly did, with four separate bidders in excess of £188,000.

‘We are pleased for the new owner of this fantastic and emblematic property and trust that they will act as a responsible custodian, helping to protect and enhance this famous coastline.’

Millions of people are set to stay and enjoy their holidays in the UK this year due to the COVID-19 pandemic.

The government’s traffic light system of grading countries has left many holidaymakers uncertain whether to risk booking a holiday abroad and then finding it has joined the list where it is necessary to quarantine on return.

The freehold listing for the beach read: ‘Land for sale.

The ‘key features’ include it is ‘coastal land within the White Cliffs of Dover’ which is an an area of outstanding natural beauty.’

It also confirms it is a ‘former rifle range’ and ‘suitable for development (subject to planning)’.

The full listing reads: ‘The property is located in Kingsdown, Kent, a small village approximately 6.2 miles to the north east of Dover.

‘The town is popular with seasonal tourists and forms part of the White Cliffs of Dover, the area therefore sees high footfall in the summer months.

The northern part of the beach, which is grassland, would be most suitable for development

‘The property is accessed from Oldstairs Road and is bordered by Undercliffe Road to the northern section.

‘Walmer and Kingsdown Golf Club is situated immediately to the west of the site alongside several high value cliffside residential properties.’

It points out that the northern part of the beach would be the most suited for development.

It stated: ‘The property comprises a former coastal military firing range and is now a section of beach and waterfront land adjacent to the White Cliffs of Dover.

‘The property itself forms part of the Dover to Kingsdown Site of Special Scientific Interest and part of the area of outstanding natural beauty.

‘The site comprises a narrow section of beach to the southern end that is covered by the sea during high tides.

‘The northern part of the site is wider and includes a beach, some flat grassland and some sea defences.

‘The property may suit some development in this area (subject to obtaining the necessary consents).’

The beach went under the hammer after being sold off by the Ministry of Defence.