New York: Irish expats and local drinkers usually dominate the clientele at the Four-Faced Liar, a dive bar in New York’s West Village. But on Tuesday afternoon they were outnumbered by a new type of patron: political wonks.

It was "Elizabeth Warren Happy Hour" and the pub was packed with fans of the left-wing populist and Democratic presidential candidate. Conversations about affordable housing policy and abortion rights mingled with the sound of grunge music blasting from the speakers. 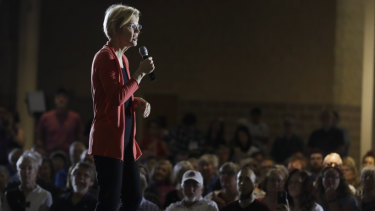 Elizabeth Warren on the stump this week.Credit:AP

Warren’s supporter base is full of so-called “high-information voters” – people like Andrea Halloran, a sales executive who organised the event. She is currently reading the entire Mueller Report in book form. For pleasure.

Sitting at the bar drinking whisky on the rocks was Paulette Henderson, a 74-year old former English language professor who knows more about Warren than some people do about their own family members.

“She's very powerful in talking about all the things she overcame in life,” says Henderson, who devoured Warren’s 2014 memoir A Fighting Chance, which traces her rise from a poor schoolgirl in Oklahoma to the US Senate.

A record number of Democrats – 24 at last count – are competing for the chance to take on Donald Trump in the 2020 election. Warren was the first big name to enter the race, but her campaign initially failed to catch fire.

Her launch was overshadowed by her controversial decision last year to publicly release the results of a DNA test tracing her racial background. Warren had previously claimed native American ancestry, leading Trump to nickname her “Pocahontas”.

Cherokee Nation representatives blasted her decision to release the results, which found a small but detectable amount of native American DNA, as "inappropriate and wrong".

In the first four months of the year Warren raised just $US6 million ($8.6 million) in donations – less than former Texas congressman Beto O’Rourke raked in on his first day as a candidate.

But, bit by bit, the two-term senator from Massachusetts has been rising to the top of the field. A May poll by Quinnipiac University found 13 per cent of Democrats named Warren as their favourite candidate – up from four per cent in March and behind only Joe Biden and Bernie Sanders.

A YouGov poll released last week found that 41 per cent of Democrats were considering voting for her in the primary, behind only Biden on 45 per cent. 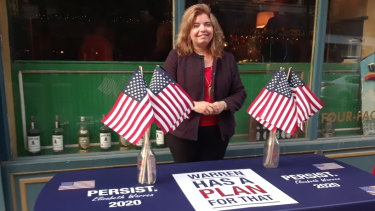 Andrea Halloran, a volunteer for Elizabeth Warren’s campaign in New York, organised at a happy hour event she organised in the West Village. Credit:Matthew Knott

Warren’s rise has been powered by a succession of policy announcements that is unprecedented in US presidential politics.

And all this eight months before the first Democratic primary voters in Iowa cast a ballot. 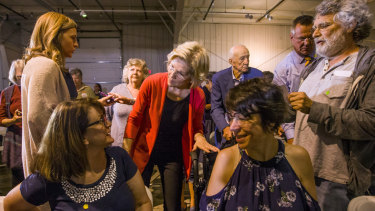 Warren speaks to people in Indiana.Credit:AP

Warren is a bankruptcy law expert who has written multiple textbooks and designed the Consumer Financial Protection Bureau, a new agency created after the global financial crisis.

She has embraced her image as the Lisa Simpson of the Democratic field – the student who does more homework than anyone else. Fans at her rallies cheer when she delivers her trademark catchphrase: “I have a plan for that.”

“She is positioning herself as the ideas lady and it’s working for her,” says Democratic pollster Pia Nargundkar. “She’s a nerd but a likeable nerd.”

Democratic strategist Scott Ferson says: “Right now in America we are in chaos. People love the idea of someone with a plan.”

I'm afraid a smart, articulate woman might put people off.

Warren’s breakout national moment came in April when, the day after the release of the Mueller report, she became the most prominent presidential candidate to call for Trump’s impeachment.

In May she garnered more attention when she announced that, unlike other Democratic candidates, she would not participate in a Fox News town hall. She blasted the station as a “a hate-for-profit racket” that has given a “a megaphone to racists and conspiracists” – an attack that delighted the party’s left-wing voters.

Asked why they are drawn to Warren's candidacy, attendees at the West Village happy hour event gave similar reasons.

They like that’s she’s intelligent, that she’s tough, that she doesn’t have to consult a poll before making a big decision.

Some prefer her to Bernie Sanders – the candidate she is closest to ideologically – because she is a woman, she describes herself as a capitalist and is a proud Democrat (Sanders is technically an independent and identifies as a socialist).

“She’s the one who excites me most,” says Anthony De Simone, a 62-year old architect who says he would rather die than vote Republican.

"So who is this Elizabeth Warren, you ask?" Carlson said. "Well, not the race-hustling, gun-grabbing, abortion extremist you thought you knew." 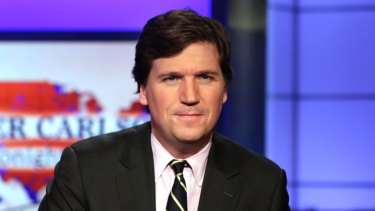 Tucker Carlson, one of Fox’s most high-profile hosts, is a surprise fan of Elizabeth Warren’s economic policies.Credit:AP

But Warren faces some big challenges – the biggest being that even her most passionate supporters are not yet convinced she can beat Trump.

A lot of it comes down to gender, and the fear that she is too similar to Hillary Clinton to win.

Most Democrats, still bruised and bamboozled by Trump's 2016 victory, are currently thinking with their heads rather than their hearts.

Paulette Henderson agrees: 'Trump makes fun of people's looks and she is not a glamorous, movie-star looking woman. Some people say she looks like a school marm."

A recent poll of Democrats in New Hampshire found two thirds of primary voters would prefer a nominee who can beat Trump than someone they agree with on policy.

Democratic strategist Scott Ferson says: "Even people here in Massachusetts people say, ‘I like her, but I wish she wasn’t running for president’.

"She is a former Harvard professor and it's easy to paint her as part of the north-east elite.

"I hear from women – and I know this is an unfortunate term – that they consider her shrill."

Polls show that Warren is most popular among Democrats who are highly educated, identify as liberal and are white. She is struggling to pick up support among minority voters – a fact that is obvious from the turnout at the Four-Faced Liar.

One of the volunteers is Hispanic and one attendee is black, but otherwise the crowd is a sea of white faces.

"We are turning towards authoritarianism in this country and we don’t have time for all these fine-tuned policies," he says. “I’d rather have someone on the TV preaching like an evangelist."

Smith's friend Kirsten Gillespie Lynch says a Trump-Warren battle in 2020 would be the ultimate superhero contest.

"Warren is about facts and data, Trump is all about feeling," she says.

"He is so gestural and arbitrary yet it appeals to people. He's a simulacrum, and I'm curious to see how truth versus the simulacrum would play out."