A man has been arrested after he allegedly attacked a woman with a knife in front of two teenagers in a suspected family violence incident in Hobart on Christmas Day.

Emergency services were called to a home on Binalong Road in Mornington about 1.30pm on Saturday following reports of a woman being injured with a knife. 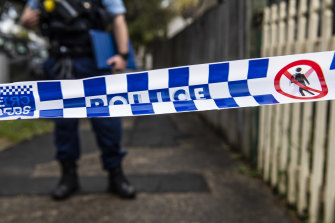 Police are investigating the attack.Credit:Louise Kennerley

At the home, officers found a 52-year-old woman with serious injuries to her upper body. She was rushed to Royal Hobart Hospital but could not be saved.

Tasmania Police Detective Acting Inspector Leah Adams said two teenagers related to the woman had witnessed the incident and while unharmed, they were distressed.

“Observing anything like that kind of incident would be distressing for anyone, whether it’s family members or not,” she said.

“So, all we can do at this time is provide support for them and establish what they did actually see.”

Detective Acting Inspector Adams would not confirm whether the teenagers were the woman’s children, but she said they were in good care and had been offered support.

Police have arrested a 60-year-old man known to the woman in connection to the alleged attack, which is being treated as family violence.

However, they would not confirm whether the pair were in a relationship, saying investigations into the matter were still ongoing.

“And while Christmas and New Year period bring people together, historically, family violence occurrences between intimate partners or ex-partners increase over this time.”

Detective Acting Inspector Adams urged anyone with information about someone affected by family violence to contact Tasmanian Police on 131 444 or ring triple zero in an emergency.

Those with information about the Mornington incident are asked to call police or report their information anonymously to Crime Stoppers on 1800 333 000 or crimestopperstas.com.au.

In a statement, Tasmania Police described the incident as distressing and said wellbeing support was on offer for the first responders involved.

“Our thoughts are with [the woman’s] loved ones at this difficult time.”

Our Breaking News Alert will notify you of significant breaking news when it happens. Get it here.