A Second World War veteran has celebrated his 108th birthday surrounded by more than 160 cards from complete strangers following an appeal from a care home.

Donald Rose said he felt ‘overwhelmed’ by the kindness of well-wishers after people from across the whole of the UK sent him a greeting card to mark his milestone.

The Royal British Legion launched an appeal on Facebook to encourage people to send the widower a card to celebrate the occasion and also his achievements during the war.

War hero Mr Rose, a former sniper and Desert Rat who also served with the Queen’s Royal Regiment, was awarded a number of medals during his service. 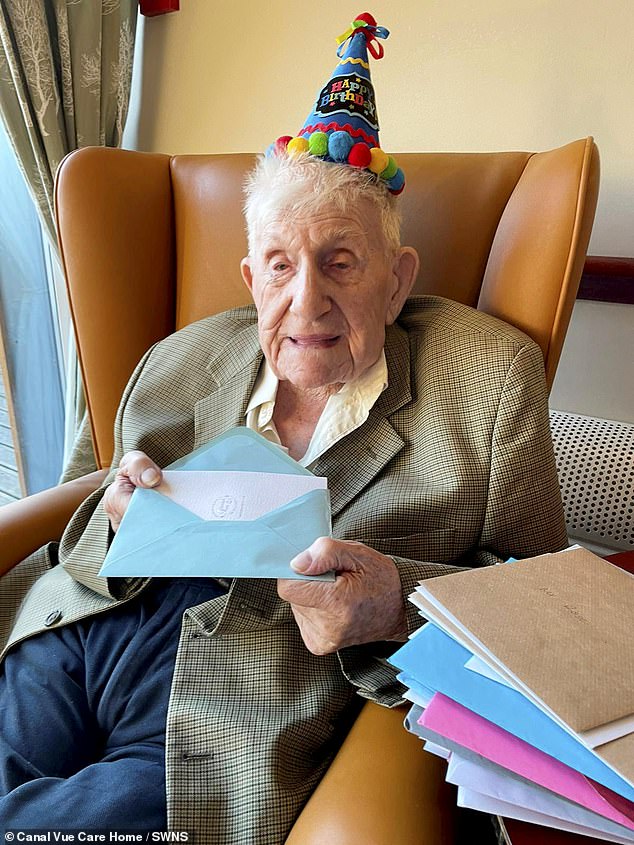 Second World War veteran Donald Rose celebrated his 108th birthday at his care home in Ilkeston, Derbyshire, surrounded by 160 cards from well-wishers – including one from the King 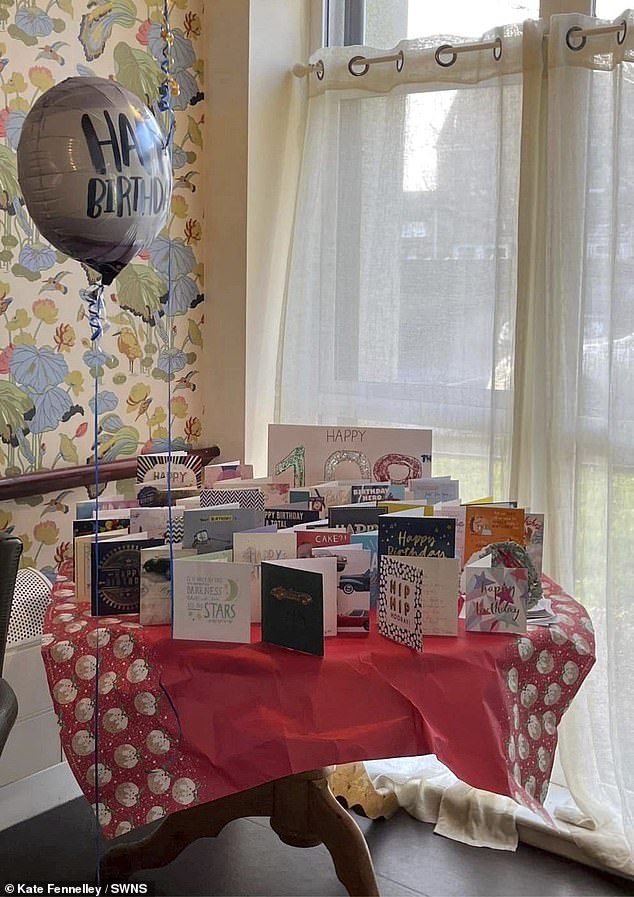 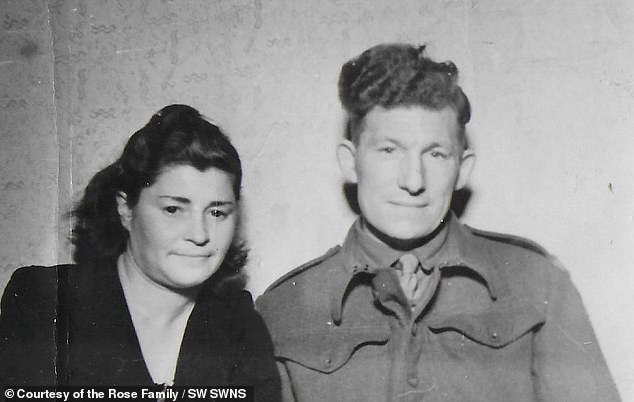 Donald Rose and his late wife Jeanette just after the war ended in 1945. They were married for 55 years and she died in 2000

These include the Legion D’Honneur – France’s highest honour and one of the most famous in the world.

The appeal was supported by the care home in Ilkeston, Derbyshire, where Mr Rose lives, and on December 24, he awoke to find 50 cards from generous strangers.

But over the next seven days, cards continued to arrive addressed to the pensioner and by the end of the week, he had received over 160 – including one from King Charles III.

David Rose, 74, Mr Rose’s only child, said he got a ‘lump in his throat’ when he saw how many cards his dad had received for his 108th birthday.

The former NHS hospital technician from West Hallam, Derbyshire, said: ‘My father went through a lot in the war and saw a lot of things we couldn’t even imagine.

‘He is the gentlest man you will ever meet and would do anything for anyone. 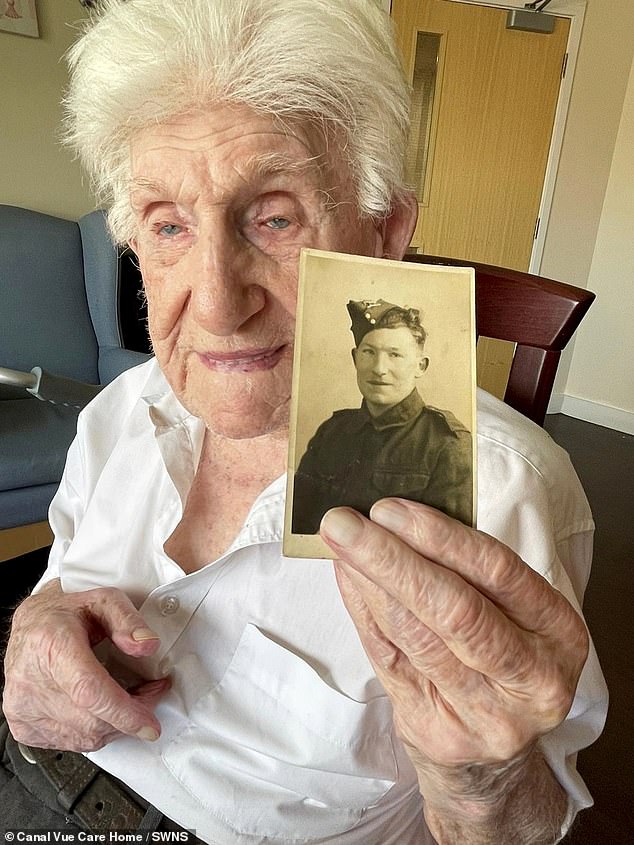 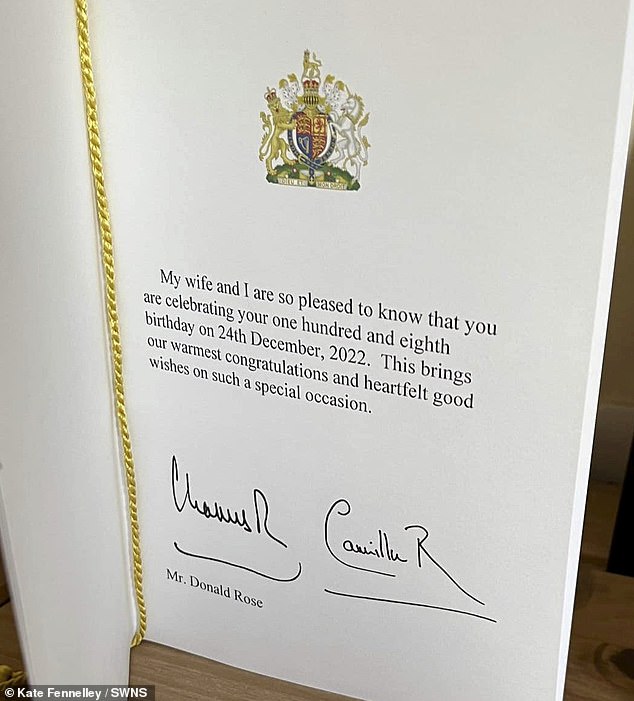 ‘Me and my wife Sue, and Donald were so overwhelmed. We didn’t know it was going ahead until the day.

‘It was very unexpected and brought a lump to my throat because the gesture was so thoughtful.

‘People sent him cards and they didn’t even know him. Even the local Morrisons sent him a card all signed. He also had one from a commander of the Desert Rats.

‘My dad has always been a hard-working man. He always worked to put food on the table and keep a roof over our heads.

‘I remember this was especially hard during food rationing in the 1950s where he used to work 24/7. He is just a gentleman really and deserves this.’

Sprightly Mr Rose has lived at the care home since 2020 and has one grandchild and three great-grandchildren.

He had lived in Westcott, Surrey with his late wife Jeannette of 55 years before moving to Derbyshire in 2000 when she passed away. 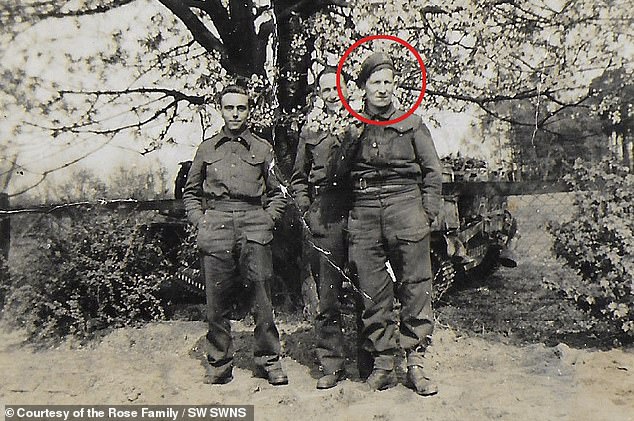 Photo of Donald Rose (red circle) and two other training solders in 1939 when he joined the Queen’s Royal Regiment, in Guilford with the 7th Armoured Brigade 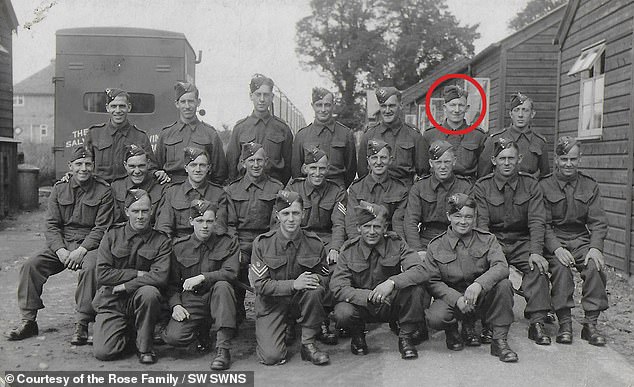 During the conflict, Mr Rose (circled in red) also joined the Eighth Army as a ‘Desert Rat’ under Field Marshal Bernard Montgomery in Africa and as part of the liberation of Italy and France

He served in the Queen’s Royal Regiment, in Guilford, with the 7th Armoured Brigade and fought on the front-line during World War Two.

During the conflict, Mr Rose also joined the Eighth Army as a ‘Desert Rat’ under Field Marshal Bernard Montgomery in Africa and as part of the liberation of Italy and France.

He also trained to become a sniper and served in North Africa, Italy, France, Normandy, Belgium, Holland and Germany.

After the war ended, Mr Rose was awarded the Legion D’Honneur – France’s highest honour medal for his services.

Natalie Summerfield, the activities co-ordinator as Canal Vue care home, described Mr Rose as ‘one of a kind’.

She said: ‘He’s a fantastic, marvellous man and really one of a kind. We were all in shock when the cards started flooding in.

‘Donald was completely overwhelmed by the support and number of cards he received. They came from all over the UK and were coming in so quick and fast.’

On his birthday, Mr Rose’s family, members of the Ilkeston Royal British Legion, the Mayor John Sewell, local councillor James Dawson, and members from the Long Eaton Sea Cadets joined in the celebrations at the care home.

‘What a great man – he deserves all that heads his way. An extremely brave and caring man throughout his life.’

Who were the Desert Rats? Britain’s famous armoured division which routed Rommel in North Africa 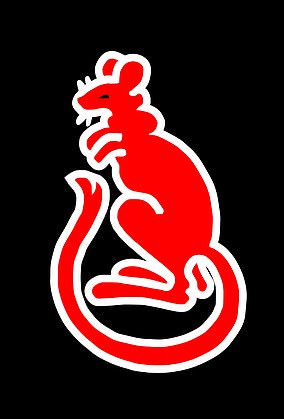 The Desert Rats’ took part in the Second Battle of El Alamein in October 1942, the Allied invasion of Italy in September 1943 and the Normandy D-Day landings on June 6, 1944, before ending the war in Germany.

Their exploits during the Siege of Tobruk were immortalised in the 1953 war film The Desert Rats starring Richard Burton.

The 7th Armoured Division was formed in 1938 to protect the Suez Canal, and went on to fight in some of the war’s bloodiest battles. Nicknamed the Desert Rats, they were deployed to North Africa where, under General Montgomery, they won the battles of El Alamein to help change the course of the war.

More recently they served on the battlefields of Iraq.

The Desert Rats went on to fight in some of the war’s bloodiest battles: at Salerno in Italy, in Normandy and crossing the Rhine into Germany. They ended the war in the victory parade in Berlin – at the very heart of the Third Reich.

The 7th Armoured Brigade was detached from the division during early 1942 and fought the Japanese in Burma before returning to battle in Italy.

The iconic unit travelled from El Alamein, Egypt in October 1942 to the ending of the war in Germany in 1945