US calls attack on Khartoum protest camp ‘wrong’ as AU, Egypt and Germany appeal for a return to talks. 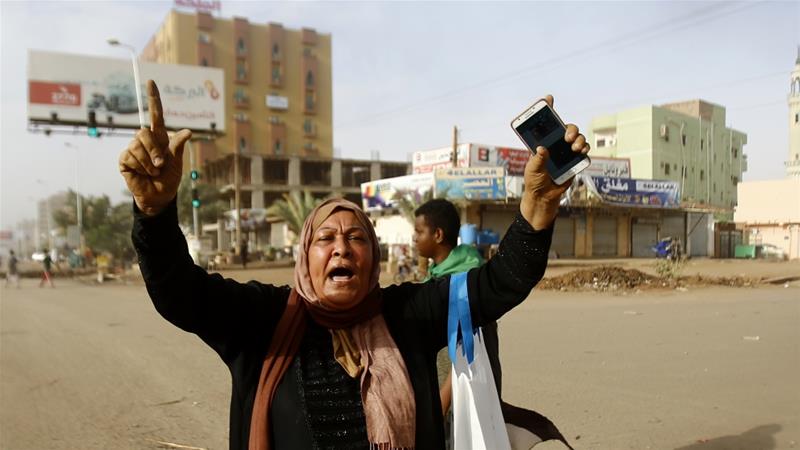 A deadly military crackdown on protesters in Sudan’s capital, Khartoum, has prompted global concern with the United States calling the assault “wrong” and the African Union urging an immediate investigation into the reported deaths of more than a dozen people.

In a Twitter post on Monday, the US embassy in Khartoum urged Sudanese troops to stop the attack and blamed the country’s ruling Transitional Military Council (TMC) for the violence.

“Sudanese security forces’ attacks against protesters and other civilians is wrong and must stop. Responsibility falls on the TMC,” read the tweet.

At least 13 people were killed, according to medics, as Sudanese troops stormed a camp at the centre of the months-long protest movement that triggered the military’s removal of the country’s longtime ruler, Omar al-Bashir in April.

Videos posted online showed protesters running through streets lined with tents, heads down and ducking as the sound of gunfire filled the air. Smoke rose from the sit-in, located outside the military headquarters in Khartoum.

The Sudanese Professionals Association, the main protest group, accused the TMC of breaking up the camp, calling the action “a massacre”.

But the council denied trying to disperse the sit-in and said security forces had targeted “unruly” groups nearby.

Jeremy Hunt, the United Kingdom’s foreign secretary, condemned the attack, calling it an “outrageous step that will only lead to more polarisation and violence”.

Moussa Faki Mahamat, the chairman of the African Union Commission, also denounced the attack and urged the TMC to protect “civilians from further harm”.

Calling for an “immediate and transparent investigation” to hold all those responsible accountable, Mahamat also appealed to the TMC and protest leaders to return “urgently” to negotiations.

The two sides held talks for weeks over who should govern in a transitional period after al-Bashir’s overthrow, but tensions mounted in recent days as the negotiations stalled over the makeup of a transitional “sovereign council” that would run Sudan for the next three years.

The TMC had offered to let protesters form a government but insisted on maintaining overall authority during the interim period. But demonstrators want civilians to run the country during the transitional period.

Until now, negotiations over the transition had kept a tenuous level of peace. But after Monday’s attack, the Alliance for Freedom and Change, which represents the protesters in the negotiations, suspended the talks with the military council and called for a general strike and “total civil disobedience”.

Antonio Guterres, the United Nations secretary-general, strongly condemned the violence and reports of excessive use of force in Sudan, according to his spokesman, Stephane Dujarric.

Guterres “condemns the use of force to disperse the protesters at the sit-in site and he is alarmed by reports that security forces have opened fire inside medical facilities,” the spokesman said in a statement.

The UN chief urged all parties “to act with utmost restraint,” called for unimpeded access to deliver care at the sit-in site as well as hospitals where the wounded are treated, Dujarric said.

Egypt, which backs the TMC, also urged both the Sudanese military and the protesters to exercise restraint.

In a statement, the Egyptian Ministry of Foreign Affairs offered condolences to the “families of the martyrs” and wished a “speedy recovery for the injured”. It also called on the military and protest leaders to resume talks.

Qatar and Germany echoed the appeal for talks.

Qatar’s Ministry of Foreign Affairs expressed “regret at the decision made by the security forces to forcibly disperse peaceful and unarmed protesters”.

The ministry appealed for “the voice of wisdom to be engaged urgently in an open, sincere and inclusive dialogue including all segments of Sudanese society.”

Christofer Burger, a spokesman for the German foreign ministry, said: “Nothing justifies the violence and it must stop immediately. The violent clearance of the protest area greatly endangers the process of handing over governing powers to a civilian-led government.”

The European Union called on the military leaders to allow people to protest peacefully and urged a speedy transfer of power to civilians.

Meanwhile, Amnesty International called on the UN Security Council to consider imposing sanctions on members of the TMC.

Sarah Jackson, Amnesty deputy regional director for east Africa, said the UN body “must consider targeted sanctions on members of the TMC and others involved in the attack”.

The TMC “has completely destroyed the trust of the Sudanese people and crushed the people’s hope for a new era of respect for human rights and respect for the right to protest without fear,” she added.