You might start with a hog’s hind leg, which tips the scale at 15 to 20 pounds. You would cure it in a brine that contains at least one potentially toxic ingredient (more on that in a minute) — a task that requires several weeks and occupies the bottom shelf of your refrigerator for the duration. Then, the smoking alone can take 24 hours or more.

No wonder most people buy commercial ham — customarily crusted with brown sugar, porcupined with cloves or shingled with sliced pineapple and maraschino cherries — and reheat it.

But what if there were an easy, relatively quick way to cure and smoke ham at home that yielded even better results than the commercial version? 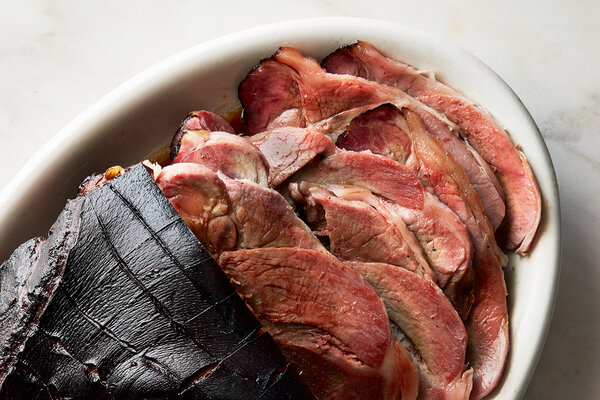 Ham has been called pork’s leap to immortality, a source of sustenance and gustatory happiness for much of human history. People have been perfecting how to make it for millenniums. By the time the Roman agronomist Cato the Elder wrote his famous treatise on agriculture around 160 B.C., the techniques for salt-curing ham he describes were well established, the precursor of today’s prosciutto and speck.

Today, there are hundreds of types of ham, many with long histories — take, for instance, York ham from England, the venerable Jinhua hams of China and smoked hams from Smithfield, Va. The easiest way to keep track of them is to group hams into two basic families: dry-cured and wet-cured.

Dry-cured hams are rubbed with salt and air-dried for several months, resulting in the tight satiny texture and complex flavor associated with Italian prosciutto and Spanish jamón serrano. It’s a process not easily undertaken at home, and you pay for the lengthy curing time. A single Spanish jamón Ibérico de Bellota, for example, can cost $1,000.

Wet-cured hams soak in a brine of water, salt and sodium nitrite (or other curing salt), often with sugar or honey added for sweetness, and bay leaves and peppercorns for spice. Here, the curing process is quicker because you can inject part of the brine into the meat (thus curing it both from the outside-in and inside-out). This is the sort of ham that graces most American tables, with moist, rose-colored meat and a salty-sweet tang.

The third element for ham-making is wood smoke, originally used as a preservative and flavoring. Both dry-cured and wet-cured hams can be smoked (most, although not all, are) — a process that can stretch days. Smoked hams are especially popular in the United States, where smokehouses routinely burn hickory, applewood or even corncobs.

Ham of the smoked, wet-cured variety is surprisingly easy to make at home, but you’ll need time, refrigerator space and one special ingredient: pink curing salt. Also known as Prague powder #1 (named for where it was originally developed), it contains 6.25 percent sodium nitrite, a naturally occurring compound that gives ham (not to mention pastrami, corned beef and bacon) its rosy hue and rich umami flavor. More important, the compound prevents botulism and other bacterial contamination.

In large quantities, sodium nitrite can be toxic, so manufacturers tint the curing salt pink to prevent it from being inadvertently used as a seasoning. Pink curing salt is available online. (Two good brands are the Sausage Maker and Hoosier Hill Farm.) Do not confuse it with Himalayan pink salt, which is pink-tinged regular sodium chloride and has no antibotulism properties.

Over the years, sodium nitrite has been embraced and vilified. (The vilification was on the basis of a questionable scientific study done more than 30 years ago.) Numerous studies deeming sodium nitrate safe when used at appropriate levels have since exonerated it. And it turns out that sodium nitrite is also found in many plants, such as arugula and celery. It doesn’t deserve its bad rap.

In terms of equipment, you’ll need a stockpot, bucket or three-gallon heavy-duty resealable plastic bag for brining and a marinade injector, which looks like an oversize hypodermic needle. You’ll use it to inject the brine deep into the meat, accelerating the curing process and making you feel a little like a mad scientist when using it.

Finally, you’ll need a way to smoke your ham: A kettle-style grill or other charcoal-burning grill with a lid does the job nicely. Set up your grill for indirect grilling and heat to 250 degrees, adjusting the top and bottom vents to control the airflow. (More airflow raises the heat; less lowers it.)

The other trick to achieving the requisite low smoking temperature is to use less charcoal (preferably natural lump) than you normally would. Add soaked, drained hardwood chips, such as apple or hickory or unsoaked wood chunks to the coals at regular intervals to obtain a light but steady stream of smoke. Alternatively, smoke your ham in a smoker.

Mindful of the reduced size of many holiday gatherings this year, try curing and smoking a shoulder ham. Cut from the hog’s forequarter (just under the Boston butt), it typically weighs 9 to 10 pounds (half the size of a full hind-leg ham) and can be cured and smoked in a week. (Don’t worry. Most of that time is waiting.) A shoulder ham remains a magisterial cut of meat that never fails to impress when presented and carved.

And if a shoulder ham still sounds daunting? You can give the ham treatment to a smaller, quicker-cooking cut, like a pork loin, also used to make Canadian bacon. Think of this as ham in a hurry. In addition to its convenient size and speed of preparation, it’s considerably easier to carve than a bone-in ham.

Commercial hams often come plumped with liquid to make them heavier and chemical additives to extend their shelf life. A disheartening number owe their “smoke” flavor not to a sojourn in a smokehouse, but to a shot of liquid smoke.

When you cure and smoke your own ham, you control what goes into it. You’ll be joining a long line of ham makers and lovers when you lift the lid of your grill to behold your smoke-bronzed porcine masterpiece. There, you’ll also find satisfaction beyond compare.